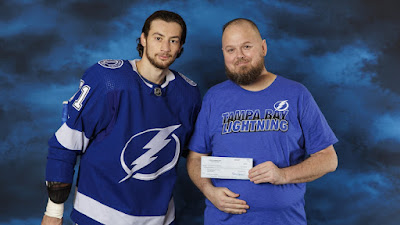 Currently, Bledsoe serves as the Director of the Gateway Contact Center, which fields calls from throughout the community struggling mentally. He initially started with the Crisis Center two years ago as a Veteran Care Coordinator, assisting veteran peers on the Florida Veterans Support Line. Bledsoe has repeatedly put others over himself in his roles, even camping out at the Gateway Contact Center through Hurricane Ian to ensure that the team felt supported as they were inundated with calls from anxious community members. He continues to work diligently to ensure his team has the support and resources they need in order to support those who are struggling throughout our community.

Bledsoe became the 526th Lightning Community Hero since Jeff and Penny Vinik introduced the Lightning Community Hero program in 2011-12 with a $10 million, five-season commitment to the Tampa Bay community. Through tonight’s game, in total, the Lightning Foundation has granted $28.67 million to more than 700 unique nonprofits in the Greater Tampa Bay area. During the summer of 2021, the Viniks announced that the community hero program will give away another $10 million over the next five seasons.